“On paper, these schools often look a lot different than what you really experience.” 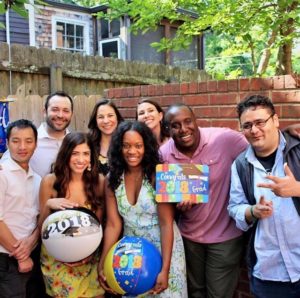 When considering a school or a potential job opportunity, it’s important to think about “fit.” But what exactly does “fit” look like — and more importantly, what does “fit” feel like?

Cleon Rice initially began considering an MBA degree while teaching biology in Atlanta for Teach for America. “I saw a lot of inefficiencies within the school structure that were prohibiting my students from diving deep into the sciences,” he describes. While that was sometimes frustrating, working as an educator helped him develop strong skills in managing teams as they collaborated to achieve common goals.

Since he enjoyed the management aspects of leading a classroom, Cleon went on to pursue an opportunity with McMaster-Carr Supply Company’s management development program. “Before, I was just managing kids. Now, I was managing and supervising teams of adults,” he explains.

Cleon says that while he enjoyed his transition to working at McMaster-Carr, he knew he had not quite found the fit he was looking for. “I felt like there was still something missing. We were selling nuts and bolts,” he says. “I asked myself: ‘What is my true interest?’”

It was around this time that Cleon became more serious about pursuing his MBA, and when he became aware of Management Leadership for Tomorrow (MLT). “I wanted to understand the type of industry where I found myself to be the best fit, as well as the types of roles that are truly valuable.”

MLT’s MBA Prep program equipped Cleon with the necessary tools to understand the process of applying to programs that suited his career passions, as well as a powerful network of support. “I think the most beneficial part of the MBA program was being teamed up with a coach who not only understands the process but helps you understand how you best fit in the process.”

With the help of his coach, Shannon Demko, Cleon applied to and was accepted into Vanderbilt University’s business school, Owen Graduate School of Management.

Cleon admits, however, that—at first —Vanderbilt was not on the top of the list of schools to which he wanted to apply. Like many MLTers, his initial instinct was to consider and aim for the places that “everyone wants to be,” as he explains it.

Vanderbilt’s MBA program got on his radar after attending an MBA Prep event at Yale School of Management, where he met Vanderbilt Business Director of Admission Operations & Diversity Recruiting Manager Consuela Knox. Cleon was living in the region and, after speaking with Knox, he decided Vanderbilt deserved serious consideration.

“I visited Vanderbilt three times,” he recounts, adding that “going to visit schools is a great opportunity to get to know the culture.” Cleon says the on-campus visits can be instrumental when trying to assess which school is best for an individual. “On paper, these schools often look a lot different than what you really experience.”

Cleon remembers how his visits to Vanderbilt opened his eyes to the opportunities in their MBA program. “What I saw and what attracted me was the class sizes,” he recounts. “After the second and third visits, everybody who was a current student there already knew me. I felt like ‘Oh wow! This is a community that I can see myself being a part of.’” He adds that as a lesser known program, Vanderbilt Business also afforded students like him a multitude of resources and opportunities that would not be possible at other institutions.

“With such a small class, the resources that are there — they’re yours because not too many people are clamoring to get them,” he continues. He realized he would have far more opportunities to shine.

After his visits to Vanderbilt, Cleon debriefed with his MLT Coach, Shannon, about the experience. He remembers telling her “‘You know, I’ve always been interested in these schools that I keep talking about. However, I keep thinking about Vanderbilt, and thinking about the comfort I felt.”

Coach Shannon’s response to him: “‘That’s what ‘fit’ feels like.’”

That feeling of “fit” never left Cleon during his time at Vanderbilt. Even during trying personal times —  first with the sudden loss of his eldest brother during his first quarter of school, then with the loss of a close classmate —  the community at Owen became an indispensable personal and professional support system for him. “I remember, all my new friends, whom I only knew for about a month or two, were calling and checking up on me, supporting me while I was gone after my brother’s passing. I just couldn’t wait to get back to school to be with my classmates. When I returned, they were just so amazing, taking care of me and making sure that I was okay. With that, I felt like I saw the true culture of Vanderbilt coming together.”

Cleon shares that the overwhelming support he received during his first year on campus inspired him to run for student body president. He explains he wanted to ensure that everyone at Vanderbilt Business, particularly underrepresented students, felt welcomed and supported. Cleon’s campaign was successful and he was elected president of his MBA class.

With the help of other executive council members of the student body at Vanderbilt Business, Cleon instituted the Diversity and Inclusion Advisory Board. The D&I Advisory Board is led by a tenured faculty member and includes additional faculty members, staff, and students. By creating a formal infrastructure within the program, Cleon hopes that diversity and inclusion remains a top priority at Vanderbilt and that students from underrepresented communities feel truly included and supported during their time there.

Cleon credits his MLT experience with helping him find that right fit in b-school, as well as success in his career. He advises that it’s important for students to utilize not only technical support but the network as well.

Since graduating from Vanderbilt’s MBA program, Cleon moved to Providence, RI, where he is currently an Associate in the Commercial Rotational Development program at Genentech. He is able to combine his roots in science and healthcare with his passion for management, and says he is energized to be working for a company that is helping to discover and develop medicines to treat patients with serious conditions.

For students looking for their own “fit,” his advice is two-fold: talk with current students and alumni, and take the time to understand what experience you are actually looking for in a business school.

“Alumni and students attend these different schools for a reason,” Cleon explains. “Networking can be vital to the school and professional experience for any students.” Especially for students who are part of MLT, utilizing the network and reaching out to experienced coaches and alumni can make all the difference in finding the right fit. It certainly made the difference for Cleon. Thanks to his network, Cleon not only found a place where he fit, he found a place where he could thrive and succeed.