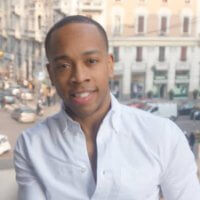 We were first introduced to Eric Majors earlier this year when he gave us his “10 Major Keys” from the MBA Prep Kickoff seminar. We reached out to Eric again to get his thoughts on the recent Summer Seminar held at Rice University. Read his thoughts below.

This text was originally posted on Eric’s blog

“Okay, so I’m about five solid months into the MLT program and I have been completing the requisite assignments while managing a hectic work schedule, travel, community service commitments, and GMAT studying. Let’s just say that over this timeframe I’ve been overwhelmed!

I have always known that the most important thing during all of this was to keep a level head and remain focused on the goal #BeastMode. With the Summer Seminar in Houston approaching at that time, I figured that it would be a much needed break from work and test prep.  But as many of my peers know – it was hardly a break.  Instead, I found myself reviewing MBA program highlights and key figures (i.e. average GPA, test scores, etc.) during my flight.  I also knew that MBA admissions staff  would be in attendance – of course, I had to ensure that I would make a good impression.

So yeah, it was GO time!  As soon as I got off the plane that Friday, I hopped in an Uber over to Rice University’s Jones Graduate School of Business.  As with all MLT events, I was greeted with the bright smiles and summer “chic” business attire worn by other MLT fellows and staff.  Perhaps the most refreshing aspect of the entire weekend was the cocktail reception where I was able to debrief  with other fellows because many of them were experiencing the same struggles and successes as I was.  Overall, I was just glad to be spending time away from the hustle and bustle of NYC.

On Saturday, the first thing on the agenda was breakfast with Admissions Officers (AOs).  In the spirit of “keeping it 100” – I was pretty nervous because I was not extremely confident in my stats nor was I exactly sure how formal I should be.  I walked over to my assigned table and took my seat and I didn’t ask any questions but rather just let others ask theirs.  After ten minutes or so I was ready to jump in with a question.  Surprisingly, the AO was more interested in how I would answer it and what I was looking to gain from an MBA.  This honestly gave me a new level of confidence and put me in the proverbial “driver’s seat”.  I was now determining if the represented school was good for me.

Throughout the remainder of the day we had many interactions with member school AOs and my confidence grew tremendously as I started to realize who “had the sauce” – me of course.  Many times, as minority candidates, I think we fail to realize that we are in high demand for business programs.  Just as much as we want to gain entrance into top MBA programs – THEY need diverse candidates.  As my good pal Chris said in his closing remarks attempt, remember who has the sauce – YOU DO. 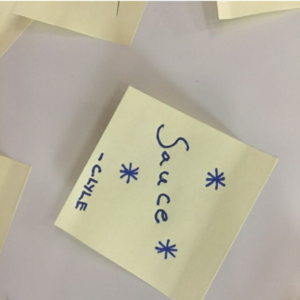 As a part of the weekend MLT Fellows wrote inspiring remarks on post-it notes. Picture courtesy of Chris Lyle

I’m now at the halfway point of the process and I have narrowed down my list of potential schools. I will begin the application process within the next two months. I’m extremely excited but, above all, I’m ready. I’ll also say this – going through this program with a group of like-minded individuals has made all of the difference.