Doubling Down on Cancer. Doubling Up on Degrees.

MLT MBA Prep 2015 alumni, Ian Bridges could have never guessed that what he thought was a routine visit to the university health clinic would lead to a cancer diagnosis. Ian shares his story of perseverance, determination, and to paraphrase the Beatles, how he “got by with a little help from friends.” After five months of grueling cancer treatment, Ian made a triumphant return to the University of Michigan to finish his dual Master’s degrees in Business Administration, and in Education Leadership and Policy. 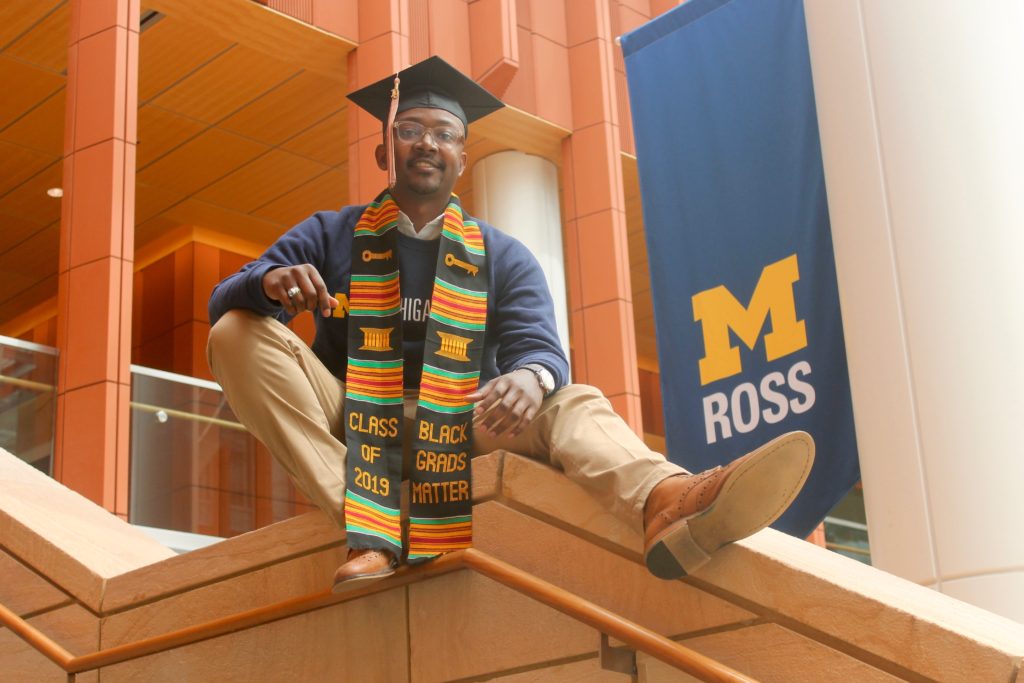 Ian Bridges isn’t quite like his peers walking across the stage for the 2019 commencement ceremony at University of Michigan’s Ross School of Business. He is graduating a year later than he anticipated when he first started b-school in 2016. Also, Ian has earned two Master’s degrees—one in Business Administration, and a second in Education Leadership and Policy. Perhaps the greatest difference between Ian and his peers, though, is that he just beat cancer. Ian vividly remembers the day he was diagnosed. It was January 31, 2018, just two days before a huge conference that he and his good friend and fellow MLTer, Aisha Miller, had been planning for months. Ian had been experiencing persistent sniffles, vociferous snoring, and a change in his voice for several weeks. At the urging of his peers and family, who were increasingly concerned, Ian thought he’d pop into University Health Services, just so he could put their worries to rest and get them off his back. Ian expected he might be advised to get more rest, drink more fluids, and, at most, be prescribed an antibiotic. Instead, the attending physician told Ian to pack a bag and prepare to check in to the hospital. Ian was worried, but not because he was scared. He wondered about what would happen to the conference he’d spent most of the previous semester planning. What about class? “I have so much to do,” he remembers thinking. Mostly annoyed, Ian made his way to the hospital. It took him awhile to realize that he wasn’t there for a severe case of strep throat…and that he wouldn’t be leaving anytime soon. Ian’s lymph nodes were so enlarged that the doctors wouldn’t let him leave, despite his protests.  The lymph nodes had become a dangerous choking hazard—even swallowing his own saliva was a risk. Medical staff inserted feeding tubes into Ian’s throat while they ran tests. Within days, the thriving b-school student was diagnosed with Stage 4 Lymphoma. Because Ian was young—27 at the time—and otherwise healthy, doctors decided he would be able to endure a more intensive chemotherapy treatment. For the next five months, Ian was in and out of the hospital, including a stint in the ICU after a bad reaction to one of the treatments. He lost a lot of weight and all his facial hair, “For context, I was bald before I got cancer,” he said with a laugh. Brittany Thomas, Ian’s good friend and Ross classmate, heard the news while she was studying abroad in Australia. She recalls being in a state of disbelief. Brittany had met Ian at MLT’s MBA Prep Kickoff seminar in 2015. She, Ian, and a few others from their MBA Prep cohort had grown incredibly close.  Brittany thought about what she could do to support her ailing friend and quickly mobilized their MLT family and other students from their Michigan Ross MBA class. Many of their classmates were studying in countries around the world—including Singapore, Amsterdam, and Argentina. Brittany asked classmates to submit a short video clip wishing Ian well. One friend, who was in Brazil, went to the iconic Christ the Redeemer statue to record her video. Brittany compiled the encouraging messages into a touching video. “It was our way of saying ‘Hey, we can’t be there with you…but we’re thinking about you, praying for you, and we know you can get through this,’” she said. The video was particularly poignant because Ian’s birthday was coming up as well. Ian was overwhelmed by the love and support from his community, which he says really lifted his spirits. Brittany sending a message of hope to Ian (click to watch)

Still, the aggressive chemo treatment took its toll. Too weak to live independently, Ian’s parents had to move the active leader and b-school student back home so they could help manage his care. The medical bills piled up and Ian, too sick, had to forego his summer internship. His community rallied to support him. Neal Stewart, another MLTer and close friend, started a GoFundMe account that raised enough money to offset the costs of Ian’s medical bills. It also helped make up for the wages he missed over the summer. The University of Michigan canceled Ian’s campus housing, with no penalty.

I’ve been able to find beauty in what most people would describe as a tragedy.

“I can’t even verbalize the significance of the support that I received from MLT and Consortium members, and just from the broader Ross community. Along with my family, my close friends came to visit me nearly every day. I was held up and lifted in prayer. People regularly were texting me and calling me and just checking in throughout the entire process. I got so many cards, I got mementos… just…” Ian’s voice trailed off as he took a moment to think about the experience. “I’ve been able to find beauty in what most people would describe as a tragedy,” he finished. In June 2018, Ian finished his treatments and was declared cancer-free. He knew he wanted to go back to school. “One of the first questions I asked was, ‘Will I be able to go back to class?’” he said. Ian’s plans included working in administration in an urban school district, with the goal of helping to increase the presence of diverse instructors. He was ready to get back on task. “People encouraged me to maybe consider doing part time or just take it slow, but I just listened to my body, and I felt like I was good.” Ian describes a painting he purchased while traveling in Ghana several years before his diagnosis. It depicts a merchant or vendor, pushing a cart of unidentified goods. The painted message on the side of the cart reads “Suffer to gain.” Ian makes it clear that he doesn’t see himself as a masochist, rather he interprets the artwork as an illustration of the difficulties we often endure to arrive at a greater purpose. “I just think that you have to go through obstacles in order to appreciate getting to the other side. The one thing that is tangible for me is that I came out on the other side. I’m a much stronger person. I’m a more committed person and just way, way, way more dedicated to doing what’s in my power to ensure that other people are able to achieve.” Ian’s MBA definitely came with a little extra fight. After graduation, he will be joining Root Inc., a change management consulting firm. And, he will be celebrating life and his newest accomplishments with the friends and family who sustained him as he beat cancer.