What I Learned Working at My First Job at Taco Bell 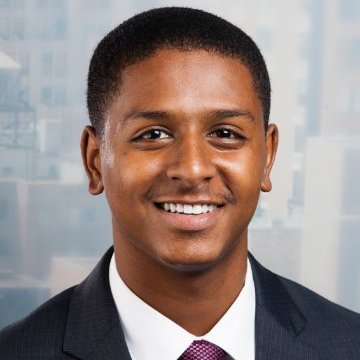 As Amjed’s MLT CP Coach, I was impressed with his strong interpersonal skills, gracious sense of gratitude and infectious enthusiasm for every task, no matter how daunting or mundane. He is unique from other CP Fellows, and now alumni, in that he is tenaciously committed to leveraging the success of all who surround him, from helping grow the Ohio State Fellow community to one of CP’s top 5 schools represented to serving as an awarded student leader on campus to garnering multiple job offers. Amjed is impressively accomplished, yet Amjed is an impactful leader. Amjed is MLT!

I gained a variety of skills that are transferrable to my business career and personal life.

When I was 16 years old, a friend suggested that I apply and work with him at Taco Bell in between school, soccer practices, and STEM Club (Science, Technology, Engineering, and Math) meetings. I thought about the idea and started to imagine all the things that I could buy with the $7.55 hourly rate that I would be making and immediately agreed to apply. No later than three or four days after filling out the online application, I received a call and was invited to the Taco Bell location that was about a mile and a half away from my parents’ home.

This was my first ever interview for a job and I was very unprepared. Like any kid would do today, I Googled “what to do to prepare for an interview” and came up with results such as: Prepare a resume, perform company research, and be prepared to discuss your qualifications and experiences relevant to the job and industry. I was overwhelmed with the amount of information it seemed like I needed to know to be able to win over the interviewer but I did not let that discourage me.

I began with the very basics: I learned about the company history, where and how they operate, and who composed the organization’s executive leadership. With all the newly gathered information, I was prepared for my first ever job interview. My interview lasted no longer than 30 minutes where the manager (someone I am still in touch with today and have learned a tremendous amount from) asked me about my education and why I was interested in the job. He also asked me about what I expected to learn at his restaurant and I remember telling him: “Whatever you’re willing to teach me.” Simple as that, I was hired!

We all encounter hardships in our lives and that we must be able to smile past the difficult times and recognize that each day is an opportunity to make strides towards living a better life.

My first week at Taco Bell was spent watching instructional videos, learning safety procedures, shadowing other employees, and getting acquainted with the point of sales system. I started to get nervous as I began to take customer orders and interact with them on my own. My manager — we will refer to him as Steve to keep his identity confidential — pushed me to be quicker in taking orders and getting customers their food while always smiling and making sure that every interaction was a positive one.

After being at Taco Bell for about two or three months, I continued to see the same set of customers frequently during my shifts. They became people whom I asked about their day, their kids, or even “that assignment” stressing them out. I grew fond of my relationship with these customers and they began to tell me that they enjoyed coming to our restaurant because the people there were kind and gave them something positive to look forward to when everything else in their lives proved difficult and a burrito or taco alone was not enough to make them happy. This gave me a sense of pride and respect for the people who do what I did and for those who set aside their emotions every day when they walk into their low-paying jobs and make our short interactions positive ones.

With a renewed sense of pride, I found myself celebrating a year at Taco Bell and receiving awards for excellent customer service, safety, and praise for being a great team member. I learned from the people that I worked with that we all encounter hardships in our lives and that we must be able to smile past the difficult times and recognize that each day is an opportunity to make strides towards living a better life. I worked with single mothers who gave up time away from their kids, elderly men and women who needed additional income to be able to pay their medical bills, and even students who started a family and needed to be able to support their new loved ones. These were just some of the people that taught me three key lessons:

I share with you these three points to remind you that technical skills alone will not enable you to have a successful career. Soft skills like these mentioned above take time to develop and master and should be given extra attention, as they are critical to building relationships. Whether you are a managing director at the world’s greatest financial services firm or an intern learning the ropes at your new job, we can all learn to be more patient, roll up our sleeves and do the grunt work when necessary, and help each other set goals to further progress our lives and careers.

My time at Taco Bell has influenced my work ethic and instilled in me a drive to help other people along the way. It is a constant reminder that we should all appreciate the lives we live and the simple things we take for granted that people work very hard to be able to afford. I hope that this story about my first job will inspire you to focus on developing relationships with those around you and invest in the development and success of those same people as my manager once did for me.