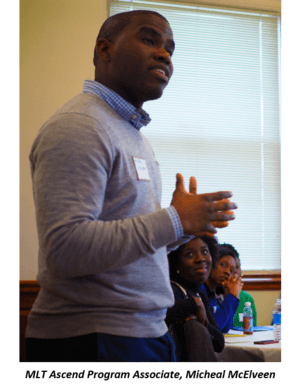 In an effort to incorporate the MLT Ascend Scholar Roadmap – a detailed action plan to achieve college success – into a learning opportunity for scholars, participants were split into groups and each group was given a realistic scenario that a college freshman could encounter. Scenarios ranged from receiving a failing grade in a course s/he was confident s/he would pass to being overwhelmed with calls from home regarding family issues. Each group was tasked with identifying the do’s and don’ts as well as creating an action plan to combat the situation.

To help scholars navigate the intricacies of their first year, three MLT Career Prep (CP) fellows served as panelists reflecting on their first-year experiences. The upperclassmen not only provided candid insights into their first-year challenges and experiences, but they also shared tips to overcome potential traps like prioritizing extracurricular activities over academics or deciding to disregard advice from coaches and advisors. 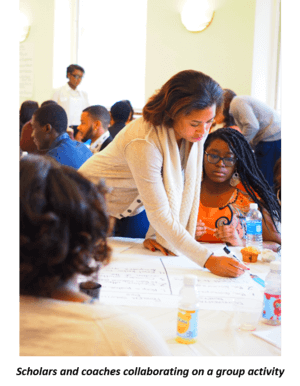 Overall, the event was a hit. Scholars enjoyed the event, calling it “amazing,” and coaches said it was “a great opportunity to interact with other coaches and scholars.” I thought so, too! We on the MLT Ascend team look forward to future opportunities to bring together scholars and coaches and create a safe space for continued learning.

Many thanks to our hosts at Howard University, especially Charles Prince, Director of the Office of Student Success & Transition, for providing a meeting space and welcoming our team, scholars and coaches on campus.

The MLT Ascend Program launched successfully in Fall of 2014 thanks to the generous support of the Citi Foundation and the Executive Leadership Foundation.