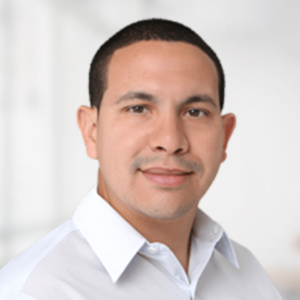 Darren Smith is a 2007 MLT Career Prep Alum. His firm, Smith & Henzy Affordable Group, develops affordable housing across the country.  Born in a humble home, Darren is now one of the most successful real estate entrepreneurs in the nation.

Darren Smith grew up in New York City Public Housing. As a Baruch College student and young father, his high grades in finance courses reinforced his intuition—he had a future in business. Darren watched others, who did not look like him, heading to jobs on Wall Street. This, along with a “no excuses” mentality, fueled his desire to work downtown himself.

Starting college later than his peers, Darren says he couldn’t afford to make lateral career moves. He took steps that would help him move vertically, instead.

Darren was one of the first students at Baruch to apply to MLT’s Career Prep program. He says this put him on a completely different trajectory, starting with his first job in Citigroup’s investment banking division.

MLT not only prepared me to land an investment banking job that I could not have gotten through my college’s career services office, but they also gave me the coaching and confidence to shoot for the stars once I got there.”

At Citi, Darren discovered the possibilities of a finance career. He worked in the Municipal Securities Division in the Sales and Trading Program, trading bonds that financed affordable housing. This was his entrance into the esoteric market and an opportunity to create lasting change.

After rising through the ranks in various real estate finance roles at Citi, Darren and his family relocated to Boca Raton, Florida. He grew accustomed to the workings of Wall Street and Corporate America, but stepping outside of New York City brought on a new perspective.

Darren transitioned into a role as a banker. He worked hand in hand with developers on financing projects, as opposed to trading multi-family revenue bonds. While in Florida, he also discovered limitless growth potential for his career. Entrepreneurship was at the forefront.

This was Darren’s first time seeing others reach new heights and milestones beyond the corporate sector. It wasn’t long before he decided to bet on himself and take a risk.

Darren co-founded Smith & Henzy Affordable Group in 2014. The firm develops affordable housing across the country. Its rapid growth confirmed that this was another step in the right direction for his career, elevating Darren’s leadership and desire to serve.

Smith & Henzy has since launched 40 deals in Florida. The group has 2,000 units in its portfolio and another 1,200 in construction. It is also recognized as a top affordable housing developer in the state, bringing public housing sites like Amaryllis Park Place to life.

Darren’s commitment to communal change goes beyond Florida and far beyond his personal gain. He’s proud to be a part of any project that involves the redevelopment of public housing. He’s most proud of those in the neighborhoods where he grew up.

Take Vital Brookdale–It’s one of his most recognizable ventures. The project is set to create 160 affordable housing units and a health-focused community space in the Brownsville neighborhood of Brooklyn. It is scheduled to complete construction by the Summer of 2022. Once complete, the neighborhood will gain new resources, including recreation centers, an ambulatory care center for the Brookdale Hospital, and a Trader Joe’s grocery store. It will also feature a commercial kitchen for entrepreneurs who are passionate about food. This redevelopment aims to solve larger issues within Black and Brown communities.

Brownsville, Brooklyn is a food desert. A lot of impoverished areas are food deserts, which leads to obesity. So, we have a Trader Joe's.”

Vital Brookdale will also benefit those aging out of the foster care system. 10% of its units are designed for this high-risk population.

That's why I love this business, because not only are you addressing housing, you're addressing communities. You're helping kids feel comfortable with their living environment.”

Next on his list is partnering with the New York City Housing Authority to own and substantially rehabilitate  approximately 1,000 public housing units in the Soundview section of the Bronx. Most of this area is populated by Puerto Ricans. Naturally, as a result of being Puerto Rican and a product of New York City Public Housing, this project is valuable to Darren. Currently, his firm is 1 of 3 development companies shortlisted to develop the site.

From growing up in public housing to owning public housing, Darren now uses his story to help others shape their own. One of his biggest motivations today is helping other business leaders thrive.

While no two are the same, his days often start early, having cortados and connecting with his team members—some of whom are young MLTers who he is proud to mentor.

I'm at the level where I'm constantly trying to help my team—help them get better, give them focus, energy, excitement, and motivation so they can continue to move things forward.”

Darren exemplifies and emphasizes the power of being a specialist in a pool of growing generalists. In doing so, he has extracted the most value for himself and others. He also believes that to be successful in business, one must first be a person of integrity. When choosing projects and establishing deals, his motto is: “If everyone wins, it’s a good deal.”

The work isn't always easy, but Darren says there is a lot to learn from financial risks and day-to-day adversities. Through his struggles, he’s found valuable lessons that he continues to pass along. Of those that stick out to him are mantras like embrace the grind, move vertically, and remain resolute.

You’ve got to remain resolute. You've got to stay the course. Don't get too high. Don't get too low on any given day. Stay even keel, because, at the end of the day, there will be 8,000 adversities and hurdles to overcome before you complete a development. If I don't remain resolute and just constantly think about pivoting, I would never be successful.”

This content has been edited for brevity and clarity.
Published in 2022