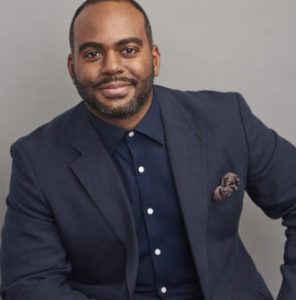 MLT Alum (MBA Prep 2007, CAP 2014) Damien Hooper-Campbell became eBay’s first-ever Chief Diversity Officer in June 2016. We caught up with him to learn about how he settled into his new role, what led him to the tech industry and what advice he has for those interested in working in the industry. Damien has since made even more history. In 2020, he became the first Chief Diversity Officer at Zoom. His leadership continues in his current role as the first-ever Chief Impact Officer at StockX.

As the first-ever Chief Diversity Officer at eBay, you have had nothing to go off of and build from. For some people that either scares them or fuels them. What do you think helps you to embrace the ambiguity?
Anytime you step into a role that is going to stretch and develop you, it should scare you. But it is a healthy amount of fear and something you should run towards. So it both scares me and it fuels me, not just because it’s a big role, but also because it’s a major opportunity to impact the lives of other human beings. I’ve experienced a lot of ambiguity throughout my career, so I’ve become comfortable with ambiguity. But to be real, there are some moments when I’m like “wow this role and responsibility are huge,” but ultimately I lean on my faith, experience, and support circle to get me through.

What personal experiences drive your work and what are the motivators behind your wanting to be a chief diversity officer?
Early in my life, I had exposure to differences across race, ethnicities, and socioeconomic groups. So my experiences including spending a semester abroad in Spain, working on Wall Street, going to a historically black college, and working in the community in Harlem, took what was innate within me, which is a love for people and a desire to help people, and combined it with concrete learnings about how to work with different kinds of people. The playing field isn’t always level – we know that. In order for you to be effective and design programs and initiatives that really influence people, you have to start at a place where you understand and embrace that there are different walks of life. For me, the Chief Diversity Officer title is simply the professional title for who I am naturally.

You have held positions in finance, academia, hospitality and the non-profit arena. What inspired you to want to work in the diversity and inclusion space in tech? And why do you feel this position is so important at eBay?
I worked on Wall Street for many years in different capacities. When I thought about what was most relevant to my life, finance wasn’t 100% it. Don’t get me wrong – it’s a great industry, I grew up in that industry. But I’m an avid technology user, always using my cellphone, on my Mac everyday, and a big app user, so technology feels more relevant to me. Also, I knew that if I was going to jump into the Diversity & Inclusion space, I needed to be in an environment that was dependent on innovation. If you think about the industries that are out there, tech is the one that is predicated on innovation. Tech doesn’t survive unless we innovate.

Can you share a quick “day in the life” of the Chief Diversity Officer at eBay?
No pun intended, but each day is so diverse. We approach Diversity & Inclusion at eBay in three buckets: Who we hire and how we hire. What it actually feels like to work at eBay. How we engage our buyers and sellers in a way that’s inclusive and representative of the diversity they bring. We have over 167 million existing buyers online across the globe looking at over a billion listings and all those buyers and sellers come from all different walks of life. Further, there are hundreds of millions of new buyers and sellers we want to have – so we have to be thoughtful of their needs too. On any given day, for example, I could be having a conversation with a group of employees in Istanbul who are interested in discussing gender diversity or inclusion. Then, I could move on to having a discussion with one of the leaders in our seller organization about how we can be more deliberate around leveraging diversity and inclusion as a driver of business and revenue. I could also be meeting with one of our many Communities of Inclusion (formerly called Employee Resource Groups) or with one of our Executive Leadership Team members to talk about the diversity and inclusion efforts they would like to champion within their teams. I enjoy every single moment of my work because so many of our employees are so passionate and excited about this. Typically, what hits my inbox are not complaints but mostly ideas and solutions and people saying, “Hey, you’re here and we’re excited to make our commitment even stronger.”

As you reflect on your time so far at eBay, what has been the most rewarding aspect of this new role?
What has been the most challenging? One of the most rewarding aspects of my role is that I have the full support of our CEO, Devin Wenig. He actually helped to create this role and made a public commitment to the entire company that he would be personally involved in hiring for the role. I have a fantastic team to help design and execute on our global diversity strategy. On top of all this, I’m at a company whose business model actually points to diversity & inclusion. The most challenging part is that there is so much that we want to do. We are excited and we have the momentum and the CEO’s support but we can’t do everything at once. So it’s been an interesting challenge to prioritize what will get done in the near-term versus in the longer-term.

What was the most valuable thing you learned or gained as part of your MLT experience?
The first thing was the importance of telling your story. My MBA Prep Coach and cohort pushed me to bring out some things that I didn’t even know were in me and to connect some dots that I didn’t know could be connected. The other piece was the importance of having a professional family. The 30 of us who went through the Career Advancement Program in 2014 still keep in touch. We actually just did a trip to Napa where we came together to coach each other on the challenges we’re facing and celebrate the professional and personal triumphs we’ve achieved since we last connected. Knowing that I’m a member of a cohort of brilliant and ambitious extended family members who have each other’s back has been incredibly helpful to my career and life journey. Those are my brothers and sisters – I appreciate MLT for that experience…a real game-changer.

How has mentorship and coaching played a role in your career trajectory and helping you achieve success?
If it wasn’t for the mentors and the people who saw something in me, I wouldn’t be where I am today. They are the people that I can come to and be vulnerable with when I have challenges, and they were the people who pounded the table for me behind the scenes. They’re also the extended family “aunties” and “uncles” who tell me like it is when I need some “real talk.” No sugar coating in my mentor circle. Separately, but just as rewarding is having the opportunity to mentor others and see firsthand what happens when you pour into another human being and pass on some of those pearls of wisdom that my mentors gave to me. It’s so enriching.

What would be your advice for underrepresented minorities who have an interest in tech, but the fear of not being a coder stops them from moving forward?
My advice would be to take a moment and look at how far those people who came before were able to go. Look at how far they got without a blueprint, without being able to get educated online for free, without programs dedicated to mentoring people in their communities, and when there were laws that prohibited them from doing some of the things that are second nature to us today. We are standing on their shoulders. If they could figure out how to build communities, how to read, and how to advance their careers when there were no advocates on their behalf, with no MLT around, then we can for sure figure out how to get over our fear of coding. But I don’t want to assume that everyone wants to code – and that’s ok. Don’t believe the hype – the tech industry has roles for people who don’t code. In many large tech companies, 50% of the roles are non-tech related. I don’t know how to code yet. It’s something that I want to do at some point. Now, would learning how to code help me in influencing our tech organization? Absolutely. Are there other ways to influence? Absolutely. Don’t believe the hype – we want you to join the tech industry regardless of what your interest is. But we need you to apply. Take a second to look at the roles on the career sites of the tech companies you’re interested in. Work your network and have some informational conversations to know how to prepare. Regardless of background, you belong here.