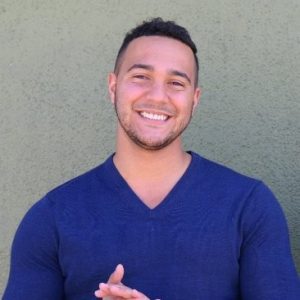 Aaron Samuels is an MLT Rising Leader (MBA Prep 2016), a Stanford Business School graduate, and Co-Founder and Chief Operating Officer of Blavity, Inc., the multimedia company and website touted by Forbes as “the standout voice of black millennials”. Blavity’s mission is to connect the world to Black culture through experiences that transcend digital and physical spaces to improve the lives of Black people.

Through Blavity, Aaron is making tremendous strides in helping others along their path to economic mobility. This is something his company prides itself on. Blavity is majority Black in terms of who they employ, and the company boasts about 80 full-time employees. For several of those employees, Blavity gave them their first job out of college. “We’ve been able to create an environment where Black people get to work around other Black people, while getting the skills they need to move through the startup ecosystem,” Aaron says. “A lot of the jobs we have are jobs that either didn’t exist ten years ago or weren’t seen as a viable career path. The idea that you can create a career being a social media manager is astonishing.” Aaron says that Blavity personnel forge more traditional paths, too, as account managers or customer success associates, for example. “These are still jobs that, a lot of times, people of color are not exposed to in college,” Aaron explains. “It’s cool that we’re creating pathways to these types of professional opportunities for people of color, whom I consider to be vulnerable populations within the context of economic mobility.”

Many companies and organizations make bold claims about their efforts to promote diversity and inclusion, but Aaron says— and shows— that Blavity is different. Not only does Blavity hire people of color (POC) and prioritize their voices in its content, they also prioritize people of color and— more specifically—women of color, in leadership. “We are a POC-led organization, but we’re also a woman-of-color-led organization,” says Aaron. “I think that makes us stronger and able to make better business decisions on a daily basis.”

Aaron says that MLT’s MBA Prep program made the business-school process far more enjoyable. “One of the most difficult aspects of being a person of color in an MBA program is that you don’t always feel connected to the same networks as other people,” Aaron shared. He recalled that many of his b-school classmates were affiliated with fraternities and sororities before matriculating, or bonded over shared experiences in banking, for example. “Moving into the MBA program as part of MLT made me feel like I had my own secret network,” he said. “I felt like I was less alone and had allies as I was engaging in the process.” Aaron says that without MLT, he might have felt more isolated in the business world.

Initially, his biggest b-school challenge was the MBA application itself. “I was working a very intense job and it’s easy to let things fall through the cracks when you’re working crazy hours,” he said. But having a supportive community of MLT peers, combined with the accountability of regular check-ins and motivation from MLT conferences, made Aaron far less likely to procrastinate on things that simply had to get done.

Aaron emerged from the MLT MBA Prep program with a network of highly motivated people of color. “I had the sense that at all the top business schools in the country, I had friends, and that we were moving through this together, as a cohort,” he said. “That made me feel less alone in the process and gave me a network of friends that I still have to this day, all of whom are doing amazing things.” That network has had a significant impact on Aaron’s personal and professional happiness. He says that making those connections early in the b-school application process was particularly significant. “You play it forward three or four years and these people are all senior vice presidents, startup entrepreneurs, and leaders and founders at some of the coolest and most powerful organizations in the country,” he said. “The small investment of doing MLT upfront enabled me to now have a vibrant network of business leaders across the world, which is helpful for a number of things -- job opportunities, a strong network of references, even business deals have manifested out of the MLT process. In moving through the business world, MLT has made my network strong and created a lot of moments of joy along the way.”

For fun, we asked Aaron to name a favorite book, song or movie and share why it’s been impactful. His answer: the Fast and Furious movie franchise. He posits that the franchise is essentially the only superhero franchise in which the majority of the cast are people of color. “Fast and Furious managed to create a counterbalance to Star Wars, Harry Potter, and the Marvel franchises, in which you still have an incredible ensemble of superhero-like people doing superhero things ranging from driving cars off of planes to incredible gymnastic scenes to saving the world...but it’s people of color who are doing them,” he says. “For me, that type of fantasy is the imaginative space I like to live in—this world where people of color are superheroes and are doing incredible things. That’s the type of entertainment that I enjoy.”

Envisioning a future like this—one in which people of color play leading roles in changing the world—is a guiding light and source of hope for Aaron. He says he’s encouraged when he meets artists, entrepreneurs or other people who don’t accept the world as it is and instead see possibility. “I try to surround myself with people like this in my social networks and hire people like this as well,” he says. “People who don’t take the rigidly defined rules of the world as a given, but are always looking to create something new, something fresh, and ideally something that moves the world toward a space of justice and equity through creativity.”